Let customers speak for us

The details of this ornament were so much more than I expected. Its beautiful. For me it's a memorial piece to my dad that loved pinecones. I do wish it would make a bell tone easily in the wind, but because of the weight of it, not much, or not what I would prefer. But yes, definitely a keeper

I was pleasantly surprised at my welcome sign. It is so cute, plus it is made very well. I know I will be back for some more of you pieces.
Thank you.
P.S.
For those who are looking at this welcome sign, you will love.

Adorable and Happy! Great accent in home or garden! 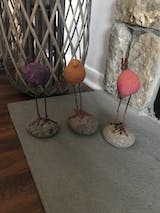 This is a great addition to our outdoor décor at our little ranch house, the birds think so too. lol 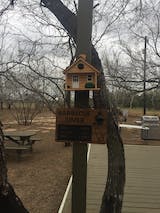 I love my garden bird, especially the paint finish. I do think it looks a bit lonely. I must order another! 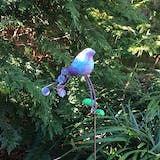 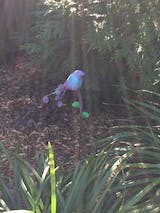 Everything you Need to Know About Wind Chimes

Everything you Need to Know About Wind Chimes

Happy Gardens has some of the most unique, and quality handcrafted wind chimes made from the finest materials, and designed to last for many years. Attention to detail and appeal is a major ingredient as we partner with artisans around the world in bringing only the most exciting decorative and functional wind chimes to market. Below we’ll discuss everything you need to know about wind chimes and what makes them so special.

But First, Why Wind Chimes, and What, Exactly, Do You Mean When You Say “Wind Chime?”

“Wind chimes are a type of percussion instrument constructed from suspended tubes, rods, bells or other objects that are often made of metal or wood. The tubes or rods are suspended along with some type of weight or surface which the tubes or rods can strike when they or another wind-catching surface are blown by the natural movement of air outside."

When Did Wind Chimes Become so Popular?

To answer this, it’s important to get a quick history lesson…

Who Made the First Wind Chime?

The Times of India says that wind chimes have been around since 1100BC when ancient Chinese civilizations cast the first wind bells called Fenglings. Considered religious objects which could attract kind spirits, it’s no wonder they’ve maintained their enchanted status throughout time. But how did they enter western culture with such widespread appreciation?

According to West Park Gallery, when Japan opened their ports to western countries in the mid-1800’s, eastern traditions and material goods began to make their way to Europe and the Americas for the first time. Now cultures around the world enjoy wind chimes around their homes and gardens.

But what does it all mean?  Why have wind chimes?  What are they for?

How often have you slowly come to the realization that the soothing/annoying (pretty much any adjective will do here) sound that’s finally impinging on your awareness is a…  Wind chime!  Right there!  That’s what’s making that delightful (hopefully, for you) noise!

Wind chimes come in an infinite variety of tones, ranging from ephemeral, tinkling faery’s bells to deeply sonorous, nearly inaudible basso tones.  And far from being relegated to frequency alone, wind chimes can be metal, glass, plastic, wood, or combinations of them, and even other materials. Some of these materials speak to us more than others, with some seeming rather unlikely to many individuals.  I’ll admit to having an affinity for wood, and for low-frequencies.

Chimes produce inharmonic sounds, the soothing “white noise” of melody. High quality wind chimes hung at differing heights will produce notably louder or clearer tones. Wind chimes can be made of metal or wood, and in shapes such as rods or tubes. Other materials can be glass, bamboo, shells, stones, earthenware, porcelain or other exotic items such as silverware -- even cookie cutters!

The literal translation of Feng Shui is “wind and water”. When it comes to Feng Shui, the oriental way of “calm rightness,” wind chimes really offer more than just music.  Some schools of thought opine that the sounds of chimes can cure negative energies, something we’d all do well enough to be on board with — who wouldn’t want to put up a little sonic balm to assuage the vagaries of negativity?

Wind chimes may be thought to ward off evil, while attracting peaceful spirits.  Wind chimes are used not just for their sound effects, but also for purifying and enhancing energy within a certain area.  They provide a calming effect, creating melodious sounds, generating meditative feelings,  and engaging senses other than just hearing -- listening to wind chimes reduces stress and promotes relaxation.  These sounds are considered to have a healing effect on the body and mind, encouraging people to listen, creating upbeat feelings, and are said to unblock emotional stress and bring feelings of inner peace and more of a sense of balance in one’s life.

Designed by Jim Bolin in 2012 the largest wind chime in the world comes in at 42 feet tall and resides in Casey, Illinois.

At Happy Gardens, we have a huge variety of beautiful wind chimes. Most of these would qualify as Outdoor Wind Chimes, although you’ll likely agree that some of these are pretty, fun, or unique enough to hang pretty much anywhere they’ll catch a breeze, or have someone brush up against them (even inside!)

Here’s an example of one of our best sellers — Shimmering Bells with Dragonflies with a cascading, inverted pyramid profile, featuring verdigris dragonflies and contrasting copper bells.

Outdoor Wind Chimes are chimes that can be put in an outdoor area such as a garden, a patio, or a courtyard.  This type of wind chime is usually made of stainless steel to avoid corrosion and to endure the outdoor weather.  Conversely, they may be made of materials that patina with age, improving in appearance the longer you own them.

How to Make Unique Wind Chimes

Of course, wind chimes don’t need to be complex.  You’ll need to suspend at least two objects in a place where wind can get to ‘em.  If you were to tie, say a piece of string to an empty milk jug, and another piece of string to a block of wood with a hole drilled in it, and if the two of them were suspended apart from each other, not touching, then a wind (or a motion with you hand) should be able to get the two to come into contact.  Voila!  A wind chime, albeit not a pretty one, not a particularly enchanting sound, and very little variety of tones (just that one thunk…).  Of course, if you were inclined to that sort of minimalist DYI, chances are you wouldn’t be visiting our site…

We’re so glad you came!

What’s a Wind Spinner or Mobile?

Wind Spinners or Mobiles offer an element of rotational movement as they harness the wind in your garden.  Take a look at the many different designs, whether they are garden wind spinners, or yard wind spinners.  Our offerings feature an array of classical, whimsical, and downright fun designs for capturing the wind, and for capturing attention.

Wind spinners are fun to look at, but can also serve a security function, startling unwanted garden visitors into flight (I’m talking to you, birds!).

Where Can You Find the Best Wind Chimes?

At Happy Gardens of course!

Wind Decorations are anything that moves with the wind, and that you’re likely to want to look at.  Here at Happy Gardens, we have that.  Whether it is a wind chime, a wind spinner, or a pennant, flag, or hanging of some kind, if it moves in the wind and it looks good, we are likely to have that.  Many folks tell us that they even appreciate that their Rain Chains will oscillate somewhat in a wind as well.

The video below is of a recording of one of our wind chimes during a breezy night, hope you enjoy! Until next time, Happy Gardens.

WHY SHOP AT HAPPY GARDENS?

Made with love by artisans world wide

Never use sealants than can harm wildlife